Hashing Out and Digging Deep: An Interview with Michael Henry Harris 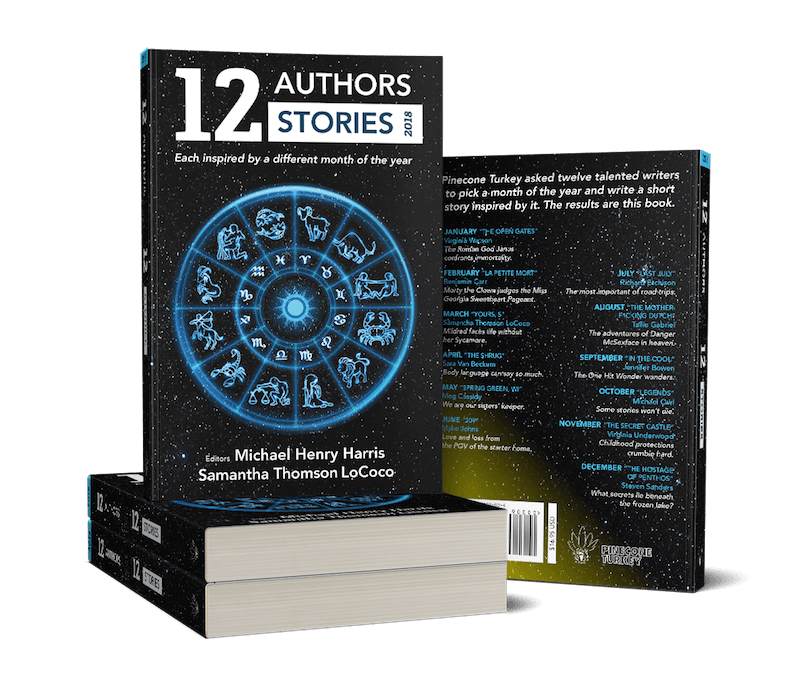 Pinecone Turkey is an Atlanta-based media company. Run by Michael Henry Harris, PT features a newsletter with “your minimum monthly dose of art,” two podcasts, and most recently an annual anthology of short fiction called 12 Authors 12 Stories, which I got to help Michael put together last year. I got to know him through the process and we had a great time meeting at my office space in Atlanta and using the white board to map goals and look at related projects and draw out a timeline. But read this interview and you’ll see that the work he and I did together just scratches the surface—apart from all the other Pinecone Turkey projects, Michael’s work on this book had him and his co-editor managing a complex editorial process. Which, as you’ll see, is all part of the fun.

What is Pinecone Turkey? Pinecone Turkey is an arts company. We distribute and create art in different mediums with an emphasis on highlighting both the process of creation and those doing the work.

At the moment, that looks like three projects:  The Flock Email – a twice a month email that contains a minimum monthly dose of art through film, short stories, poetry, and visual art. Two podcasts, The Origin Story Podcast – conversations with superheroes from all walks of life – and The Owls on Culture Podcast – where my 12-year-old son and I discuss everything from Marvel movies to museum exhibits.

We also recently published our first of what will be a yearly anthology of short stories all under the moniker of 12 Authors, 12 Stories.

Future plans include both web content and television and film production.

How did you come up with the idea for the anthology?

I don’t remember when or how the idea came to me to create 12 Authors, 12 Stories. I was probably feeling a lack of movement in my own creative life, and needed a kickstart to get it going. I’m happiest when I’m making progress on a project, and my favorites are ones where I can give others an opportunity to play as well.

This is going to be an annual project, right? So the subtitle will change every year according to the theme? What’s the next edition going to be called?

The next edition will be stories all from the world of the theater. I’m not sure what the exact wording will be, but it will probably look something similar to: 12 Authors 12 Stories: Each inspired by the world of theater.

Once you decided to do it, what were some of the biggest challenges you faced?

There were two big challenges. One was filtering through the glut of information available to small presses and self-published authors. It’s hard to determine whom to listen to. I began this journey knowing nothing about how to do this, and quickly realized there was no “right” way, which made it all seem very intimidating and overwhelming. Finding Adam was the key to wading through all the muck and keeping me sane. Thank you, Adam!

The other challenge was getting some of the stories from good to great. Even when talented, hard-working people are sharing the same vision, creating something amazing is much easier said than done. When it comes down to it, writing is still really, really hard.

Did everyone you asked for a story end up contributing?

Only one writer was not able to submit something we could work with. One out of twelve isn’t too bad. Happily, my co-editor stepped up and knocked it out of the park.

What was the editing process like? Any funny stories there?

The editing process was fun. I’m in awe of my co-editor Samantha Thomson Lococo. She made every story she worked on so much better, including my own. Our story meetings—hashing out and digging deep on each aspect of the work—were a blast.

Since Sam lived in New York and I live in Atlanta, we’d talk on the phone most Friday afternoons with a status update on each story and then usually a work session on one or two of them, if the writer was awaiting feedback and notes. Depending on the session, these lasted anywhere from fifteen minutes to two hours. Often, after hearing each other’s points of view, we’d go back back and re-read the story with the other’s persons notes in mind. This made the process both fun and refreshing. It’s nice to get out of one’s own head sometimes.

Plus it was Friday afternoon. What’s more fun than talking story with someone who knows their stuff? It was work that didn’t feel like work.

What are your goals for sales? World domination? Recoup your investment? Grow a little with each issue?

My first goal was merely to get it out there and have it not suck. I don’t know about you, but I have a metaphorical closet full of projects that I’ve considered, begun, or blabbed about that have never come to fruition. The book is real and live and really good – so that first goal has been met. The next goal is to sell 500 copies in 2018/19, and then 500 more by 2020. We launched mid-December 2018 and are well on our way to making our goal.

What other goals did you set for the book?

The other related goal is to continue the series with 12 Authors 12 Stories 2019 and beyond. The beautiful thing about producing a book versus a play (my background) is that it can be on sale forever. I’m hoping that by continuing the series for the foreseeable future, the 2018 edition will eventually find an even wider audience in the years to come.

How was the launch party, in terms of reaching any of your goals? It seemed like a huge thing to put together, and a great success, from my point of view.

The launch party was great. I was fortunate to partner with Write Club Atlanta (check ‘em out!) which meant I had access to a great venue, people who knew how to run similar events, and a bit of a cross-over audience. I was also lucky that friend and musician/storyteller Will Haraway agreed to play a few songs and that three talented writers published in the book were willing to read portions from their stories. I think the event represented Pinecone Turkey well—and we sold a lot more books than I’d imagined.

Will and I are currently collaborating on a project that will chronicle our attempts to birth some new art – new songs for him and novel for me. We’ll see how it goes!

Anything you’ll do differently when working on the 2019 version?

I’m doing a few things differently. One, I’m taking submissions this year rather than approaching individual writers. Two, I’m actually going to design and implement a marketing campaign and attempt to get professional reviews and media. While I did some marketing work for the 2018 version, most of my best ideas were never implemented.

I’m looking forward to making different and better mistakes this next time around.

What else do you want to tell GBD readers?

Go to pineconeturkey.com to join The Flock—our bi-monthly email featuring a new-to-you story, poem, visual art, and short film each month. It’s your minimum monthly dose of art, plus updates on everything Pinecone Turkey, including our two podcasts, The Origin Story Podcast and the Owls on Culture Podcast.

And go to iTunes and subscribe to our two podcasts.

If you’re thinking about writing or publishing a book, do it. The process, while long, is worth it. Just manage your expectations and be sure you’re enjoying the journey.

This is my fourth book. Two were done through traditional publishers and one was self published...

Originally I had connected with Adam pre-pandemic to consult on my personal project in creating...